skip to main | skip to sidebar

A Visit to Hever Castle

Hever Castle is the ancestral home of Anne Boleyn.  I've been fortunate enough to visit it a few times.  Obviously the castle has changed over the years but you definitely get a feel of what life was like for the Boleyns.

The castle is set amongst some fabulous gardens and is surrounded by a moat.

This is the church near the castle.  Anne Boleyn's father, Sir Thomas Boleyn, is buried here.

Hever Castle has some wax figures at the castle.  This model is of Anne Boleyn, clutching in her hand the locket snatched from Jane Seymour after Anne reportedly found her with her husband, Henry VIII.  There is also a model of Henry and Jane in the background.

A coif stitched by Anne Boleyn.

Another scene with models, this time Anne reads a love letter sent by Henry VIII.

A tapestry on show at Hever.

Portraits of Anne Boleyn, above, and Mary Boleyn below.

For me, the highlights of Hever Castle - 2 prayers books owned by Anne Boleyn.  Priceless!

A Visit to Hampton Court - The Field of Cloth of Gold

It's been a long time, but at last I was able to to visit Hampton Court again.  I have visited the palace many times, and one of the things that keeps me going back, as with the Tower of London, are the changing exhibitions.  In 2020, the exhibition was to celebrate the 500th anniversary of the Field of Cloth of Gold, the event commemorating  the meeting between Henry VIII and Francis 1st organised by Cardinal Wolsey.  Obviously, it was unable to take place last year and has opened this year.  Tickets for the palace now have to be bought online and the palace has taken every measure to safeguard the public.  The exhibition is well worth seeing and some of the exhibits are amazing.  There's a link on the palace website to the exhibition page - Field of Cloth of Gold with a short video of some of the exhibits.   The official painting of the event was commissioned by Henry VIII later in his reign, as you can see by his portrayal.  There is so much detail in the painting and it tells the story of the preparation, the people who attended and the events that took place.   Every time I look at it, I'm fascinated and find something new.

The painting is always on show at Hampton Court (unless it is lent to other exhibitions).  The wine fountain is replicated at Hampton Court.  For me, the highlight was to actually see 'Henry VIII's hat'.   I've seen it many times on television, but never actually on show.  Just standing there thinking 'this has been on Henry VIII's head' gave me goosebumps!  Other highlights for me were the tools on loan from the Mary Rose exhibition, and the elaborate robes worn by Cardinal Wolsey. 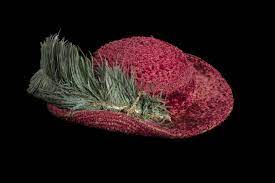 The exhibition runs until September.   If you can't make it, check out the video on the Hampton Court website.

After the death of Piers Gaveston on June 19th 1312, a list of his possessions and treasure was made by Thomas of Lancaster.  It is a very detailed list, and can be found in J S Hamilton's 'Piers Gaveston, Earl of Cornwall' book.  It makes fascinating reading, and not just because Piers was accused by one chronicle of stealing from the Royal treasury and hiding it abroad.  The fact that Edward II had basically put him in charge of the treasury is over-looked.  And if Piers was smuggling items abroad from the treasury, he didn't do the job very well, as the list of royal treasure is vast!   Of course, Lancaster's aim was to try to prove Piers had the treasure illegally, so there are lots of mentions of gold and silver cups and basins belonging to the Queen and other members of the royal family, including a cup that had belonged to Edward II's mother, Eleanor of Castile.  Kathryn Warner's excellent Edward II blog has a superb post about some of the items that were returned to the king by Lancaster.  Here's a link to the post -  Piers Gaveston and the Royal treasure.

Clearly some of these silver and gold cups etc did belong to Piers - they had his coat of arms on them.  There were also embroidered pearl encrusted tunics and rich fabrics, including green silk.  The list of gold and silver buckles and clasps is astounding!  Most of the items are given a value as well.  Lancaster was obviously making a point - that Piers had illegally acquired the jewels and treasure, many of which did not belong to him.   But of course, Edward II already knew this - after all, he had put Piers 'in charge' .

I think by favourite items from the list are the 3 forks, which belonged to Piers and were used for eating pears!  Forks were unknown in England at the time, as people ate with a knife and their fingers.  The idea of the graceful and elegant Piers eating pears with his own forks makes me smile.

June 19th - Anniversary of the death of Piers Gaveston

June 19th is of course the anniversary of the death of Piers Gaveston in 1312.  Having surrendered to Aymer  de Valence, Earl of Pembroke, on very favourable terms, Piers was heading south with Pembroke when he was abducted by Guy, Earl of Warwick.  He was imprisoned and given a charade of a trial, in which he was not allowed to speak.  He was found guilty and sentenced to death.  Warwick, too cowardly to do the deed himself, handed Piers to the king’s cousin, Thomas of Lancaster.  Lancaster marched Piers from Warwick to his own land at Blacklow Hill.  He handed Piers over to some soldiers, who took Piers a little further, and ran him through with a sword and the cut off his head.  It seems even Lancaster couldn’t bring himself to watch such a shameful episode in English history.  RIP Piers. 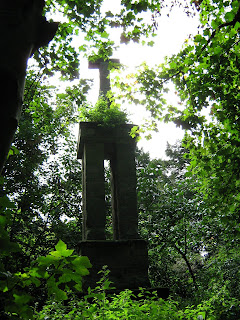 The monument erected in memory of Piers Galveston in the 19th century at Blacklow Hill. 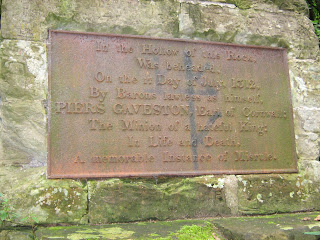 The inscription on the monument at Blacklow Hill.

May 19th - surrender of Piers Gaveston at Scarborough Castle.

Parliament of August 1311 ordered yet again the exile of Piers Gaveston, Earl of Cornwall and beloved friend of Edward II.  Piers had already been exiled twice before - by Edward Ist and early in the reign of Edward II.  Each time, Edward II had worked tirelessly to bring Piers back.  This third exile was more serious in that the powerful nobles of Edward's reign had appointed themselves 'Lords Ordainers' who sought to reform the King's household and free him from the evil influence of those who brought ill to the kingdom - and that was of course Piers Gaveston, public enemy number 1.  No doubt it was jealousy of the closeness between Edward and Piers that was the driving force, and the fear of the influence of Piers, who was accused of giving the King bad advice and sidelining the King's 'loyal' followers.  Edward had tried everything to avoid sending Piers into exile - including shockingly to agreeing every other demand by the Ordainers if they would allow Piers to stay.  But it was not to be, and Piers was sent into exile.  If he ever did go.  He certainly lay low and hidden from the nobles.  Edward of course had probably begged him not to go, and that he would work for the exile to be revoked.  Plus Piers wife, the King's niece Margaret, was heavily pregnant, and no doubt Piers wanted to be with her.  Piers was reported back in England by January 1312, and was reunited with Edward at Knaresborough.  I'm sure Edward and Piers were certain that once again, the charade of Piers going into exile and being re-called would continue - and probably for many more times!  So when things came to a head yet again, Piers prepared for a siege at Scarborough castle.

It wasn't much of a siege!  Scarborough Castle was a formidable castle, and Piers should have been prepared for a long siege.  He could also have fled by boat from the castle.  However, the castle wasn't set for a siege, and Piers surrendered on May 19th to the Earl of Pembroke, Amyer de Valence on very favourable terms.  Pembroke swore an oath to protect Piers and treat him well in custody.  It was hoped an agreement could be made and if not, Piers would be returned to Scarborough Castle and prepare for a siege.  Piers must have been relieved to surrender to Pembroke and would have had no doubts about his oath.  Piers should have been safe.

Scarborough Castle is now a ruin, but it's keep is still impressive. 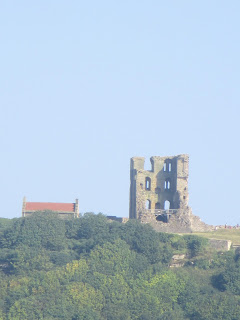 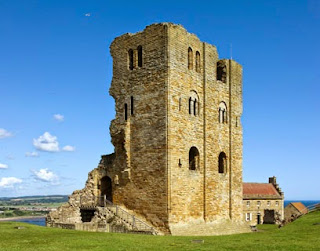 Also on this day, Queen Anne Boleyn was executed at the Tower of London.  RIP Anne - my childhood heroine. 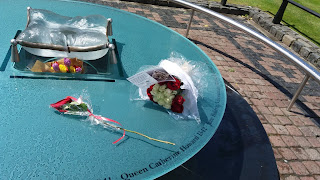 Thank you to Unknown who left this comment on my blog March 18th.  You can't beat local knowledge and I live in hope of an important discovery one day!

Piers Gaveston was loathed by many at the English court for his friendship and influence over Edward II.  This loathing took several forms, chief amongst them that Piers the son of a low born Gascon knight.  Certainly Piers was born and raised in Gascony - but he was much more than the son of a Gascon knight!

The relationship between Gascony and the English crown was a complex one.  Gascony was part of the Duchy of Acquitaine.  Acquitaine had been part of the mighty Anjevin Empire, with the marriage between Eleanor of Acquitaine and Henry II of England.  The collapse of the Anjevin Empire during the reign of King John meant the Duchy if Gascony became a thorn in the side of both the French and English kings.  Edward II's father, Edward Ist, held the Duchy of Gascony by being a vassal of the French king, Phillip IV, through the Treaty of Paris of 1259.  EDward Ist had spent some of his youth in Gascony.  Tensions erupted in 1294 between Edward Ist and Philip, and lasted until 1303 when a new Treaty of Paris was signed.  Many Gascons were loyal to the English crown, and one of these was Piers Gaveston's father.

Piers' parents were Arnaud de Gabeston and Claramonde de Marsan.  His father was descended from the leading nobility of Bearn.   Claramonde de Marsan was the daughter of Arnaud-Guillaume de Marsan.  Along with her brother Fortaner de Lescun, she shared the estates of her father, which on her marriage to Arnaud made him a substantial landowner.  Hardly a 'humble knight'.

The couple had five children - Arnaud-Guillaume de Marsan, Piers, Gerard de Gabaston, Raimond Arnaude de Gabaston and Amy de Gabaston.  His father served Edward Ist for almost 20 years, following him on various campaigns.  This is how Piers came to the English court, along with 2 of his brothers.  Piers first appears in the service of Edward I in Flanders in 1297, where his wages were given as 12d.  His horse was valued at 12 marks.   Piers would probably have been in his teens at this time, and went on to serve Edward Ist , along with his father, in Scotland.  At some point, Edward Ist thought Piers a suitable companion for his son - as a role model, with graceful manners and having proven himself on the battlefield.

Arnaude de Gabeston died in 1302, and was accorded the honour of being buried in Wichester Cathedral.  His tomb is pictured below. 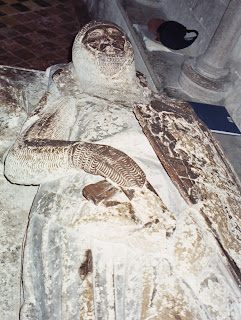 Source - 'Piers Gaveston, Politics and Patronage in the reign of Edward II' by J S Hamilton.

Coat of Arms of Piers Gaveston, Earl of Cornwall.

Anerje
I have a B.A. Honours in History, specialising in Medieval/Tudor history.